If God leads you, please help us here in Guatemala at the Eagle’s Nest.  I have committed myself to serve in country and partner with the Eagle’s Nest.  I am needing help with support and living expenses to be able to serve on site with them.  I am more than excited to be serving the children of Guatemala, Eagle’s Nest, and the kingdom of God in the year of 2022 (and who knows how much longer after that).

Hello, my name is Calley Jackson.  I am from North Carolina and one of my little sisters, Miley, is adopted from Eagle’s Nest in Guatemala. That is how my family and I became friends with Felis. We adopted Miley 13 years ago now, so my connection with Guatemala and Eagle’s Nest is long lasting. The second my little sister came home, I started to realize my intrigue for Guatemala and all that comes along with it. I went with my mom on a missions trip to Eagle’s Nest and then with my whole family again years later. My love for Spanish and it’s culture grew. One of my majors at school was Spanish, so I was able to dive deep into my passion. I even spent a whole summer living with a Guatemalan family for the Spanish emersion trip my school takes every year. I spent the whole summer in Zacapa, where I volunteered at an orphanage and lived with a family in the nearby village. My Spanish grew, but I also learned a lot about myself and the Lord that summer. I saw how much strength the Lord gave me when I was working for Him. Looking back, I’m not quite sure how I made it through some of the times I did there. I never felt down, even when I was very sick, hot from the constant 100 degree temperatures (no AC of course), adjusting to no running water or when I could not speak English for 6 out of the 7 days each week. I loved every minute of it. I learned about myself, the people there, and most importantly about what the Lord was leading me to do. I knew I could not waste the talents and passions the Lord has laid on my heart. He has given me the strength to endure, the courage to be independent, the confidence (sometimes) to speak another language, a love for the people of Guatemala and much more. I do not want to let any of that go to waste, but I didn’t quite know what that looked like yet.
Fast forward a few years later, I come to my college graduation. May of this year I graduated with a double degree in Spanish and Strategic Communication. I was lined up to attend graduate school and I had a job at the college as well. In April before I graduated, I felt the Lord calling me to more. One night, I felt what the Lord wanted me to do, but part of me was really scared to face it. I have told people ever since I was in middle school that one day I would live in Guatemala and work at my sister’s orphanage. I kept telling everyone that, but I never acted on it. I thought that summer in Zacapa would suffice. However, the Lord had much more planned for me. I decided to call Felis and tell her about what the Lord had put on my heart. She talked to the board about it and of my passion and commitment to missions. When I was 10 years old, I had told Felis that I was going to live in Guatemala one day. She remembered that conversation and that statement was one of the main reasons Felis knew I was serious about this. She also mentioned my character and my education which benefitted my decision greatly and resulted in a yes from the board. God’s timing is perfect and though I thought it was too late to do this, it turns out that I was right where He wanted me to be when He wanted me to be there. I am more than excited to be serving the children of Guatemala, Eagle’s Nest, and the kingdom of God in the year of 2022 (and who knows how much longer after that).
If you have any questions please email me at:  calleyjackson17@gmail.com 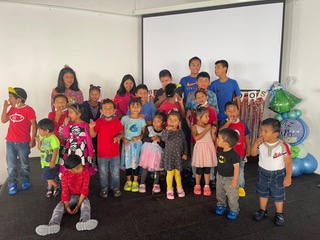 Vietnamese
Clear Clear All
0
Your Basket